FOR the last seven years that Kairol Rosenthal, 35, has battled thyroid cancer with hormone pills, radiation, surgery and grit, she has had to contend with 101-degree fevers, heart palpitations and a lack of appetite so pronounced she has to force herself to eat.

The hormone therapy, designed to slow tumor growth, leaves red blotches on her face and bone-dry patches along her jaw line, said Ms. Rosenthal, a choreographer and writer in Chicago.

“I have not yet made my peace with having skin that doesn’t look good,” said Ms. Rosenthal, who spends most of her free time hunting for news about thyroid cancer. “I want my skin to look good.”

So Ms. Rosenthal was pleased when she heard an advertisement for Lindi Skin, a skincare line designed for cancer patients, on a radio program called “The Stupid Cancer Show.”

“It’s great someone has cancer patients in mind,” said Ms. Rosenthal, who is writing a book about living with the disease, to be published by Wiley.

She ordered samples of the brand’s face wash and lavender face serum, which, Lindi Skin’s Web site says, “are intended to help individuals feel better, both physically and emotionally and gain a greater degree of control over the side effects they experience during radiation therapy and chemotherapy.” 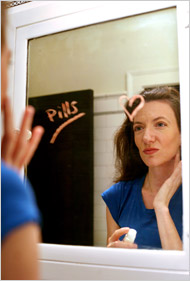 Depending on whom you ask, such products give patients one more tool to ease side effects or false hope that a cancer-specific balm is more effective than a mild drugstore lotion.

It’s now easier than ever for cancer patients (and their relatives who come bearing presents) to find skin-care lines made specially for them. At least five brands are now sold in the gift shops of prominent hospitals, and some makers give free samples to oncologists for distribution to patients.

Lindi Skin started in 2003 with six products, after its founder, Lindy Snider, watched two friends endure cancer treatment. In March, its 13-piece line of creams and skin cooling wraps arrived in drugstores including the Duane Reade chain and the independent Minooka Pharmacy in Minooka, Ill. For the first time, the American Cancer Society is considering including Alra, a 20-year-old skin-care line, in its catalog, which is mailed to 1.2 million people.

As far as cancer side effects go, far greater attention has been paid to hair loss, fatigue and nausea than to the burns caused by radiation and dry skin caused by chemotherapy. But the tide is starting to turn. Northwestern University opened the Cancer Skin Care Program, one of the first centers of its kind, in 2006.

And oncologists and dermatologists are giving greater consideration to dermatologic issues, in part because new cancer-fighting drugs called targeted therapies can cause rashes so severe that some patients threaten to drop out if they are left untreated.

“There are more drugs that cause skin issues nowadays,” said Dr. David Decker, an oncologist at William Beaumont Hospital in Royal Oak, Mich. “Radiation has always caused problems, but there are new drugs that cause issues, so skincare has become more of a focus.”

That has created an opportunity for makers of cancer-specific balms to grab the attention of doctors who previously might have dismissed them. Lindi Skin has nine sales representatives to hand out samples to oncologists (and plans to add three more this year). Jean Soulios of Beverly, Mass., who has had breast cancer, distributes samples of her Jeans Cream, an aloe-and-vitamin-E balm for skin irritated by radiation or chemotherapy, to about 20 hospitals. (It is also now sold in about 75 stores.)

“Addressing skin care is not unreasonable,” said Dr. David F. Horne, an assistant clinical professor of dermatology at NewYork-Presbyterian/Weill Cornell. “The patient may have a tumor in their lung but the changes they’re seeing are in their skin.”

Some oncologists don’t wait until a rash or blotches develop. Instead, early in treatment, they recommend soothing body washes and creams to patients. For instance, Dr. David I. Rosenthal, the director of head and neck radiation research at M. D, Anderson Cancer Center in Houston, gives his patients samples of Lindi Skin Cooler Rolls and body lotion.

“It is my impression that these skin conditions that are cancer-treatment-related are neglected,” said Dr. Rosenthal, who sits on Lindi Skin’s medical advisory board but is not paid by the company. “They can cause discomfort for the patient and should be addressed proactively.”

Still, there’s no proof that any of the products designed for cancer patients calm or heal skin irritated by radiation or chemotherapy any better than over-the-counter products like Cetaphil or CeraVe, according to the oncologists, dermatologists and oncology nurses interviewed for this article. Even Dr. Rosenthal said that “there’s not been any scientific study to show that these products are superior in any way.”

“They’re marketing to a vulnerable population,” she said. “Cancer patients go through so many body image concerns and changes. They get scars. Their skin changes from radiation. Sometimes the chemotherapy causes rashes. Their hair can fall out. They’re going to try anything to look and feel better.”

Ms. Snider of Lindi Skin doesn’t think she’s taking advantage of cancer patients. “Most people, if they have a special need, they’re willing to buy a product,” she said. “It’s sort of like saying, ‘Why isn’t chemo free?’ Doctors who administer chemo make money on that. We need to afford to make these products. I’m trying to fill a need.”

Jeans Cream and Lindi Skin are packaged in a way that they wouldn’t seem out of place at Bloomingdale’s, but they also sell for department-store prices. Lindi’s body wash costs $20 for 8 ounces, and its face serum, $40 for 1 ounce. Seven ounces of Jeans Cream is $45. 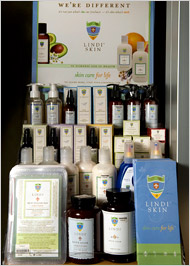 Ms. Rosenthal, for one, can’t afford them. “Forty bucks,” she said, “is two co-pays to a doctor or four co-pays for my prescription drugs.” But she did like the Lindi line, finding it “excellent for hydrating my skin. I have a hard time tolerating even naturally scented products, but I have no problem with Lindi’s lavender scent.”

Radiation can cause what looks and feels like a sunburn on the area the beam passes through to get to cancerous cells, and chemotherapy can make the skin and lips dry and itchy because it indiscriminately tries to damage all fast-growing cells, including skin cells.

Simple wound care should heal skin aggravated by either treatment, the dermatologists interviewed for this article said. They recommended washing the affected area gently, patting it dry, keeping it moist and bacteria-free with a petroleum-jelly product like Aquaphor, and covering it with gauze. “I say to patients, ‘You’ll have just as good as an outcome with standard wound care, rather than expensive products,’ ” said Dr. Horne of NewYork-Presbyterian.

But targeted therapies can be harder on the skin than radiation or chemotherapy, Dr. Decker and Dr. Rosenthal said. They attack tumor cells specifically instead of all cells and can cause very dry skin or an upper- or full-body rash.

Dr. Mario Lacouture, the director of Northwestern’s Cancer Skin Care Program, sometimes treats skin conditions caused by targeted therapies with prescription corticosteroids and antibiotics. He will soon begin a study of over-the-counter products to see which best ameliorate side effects of targeted therapies. (Lindi Skin gave a $65,000 contribution to his research.)

Dianne Dassa, of New York, 66, said that Lindi products helped heal her radiation burn and her psyche. While being treated for breast cancer, she used the Lindi body wash and serum, preferring them to the body wash and Aquaphor her radiologist suggested. When they arrived, Ms. Dassa said, “They were so beautifully packaged, I felt like I was getting a gift.”